As we enter October we know there are many upcoming holidays and celebrations that you may want to highlight in your classrooms in the upcoming months.  Finding resources on specific holidays and celebrations is easy! Use Search Enrichment Activities or Advanced Search to enter your keywords such as “fall activities”, “Halloween”, “Dia de los Muertos”, and more! From science experiments to ebooks you will find something you are looking for!

This week we are highlighting October Celebrations and Fall Activities through our weekly activities! 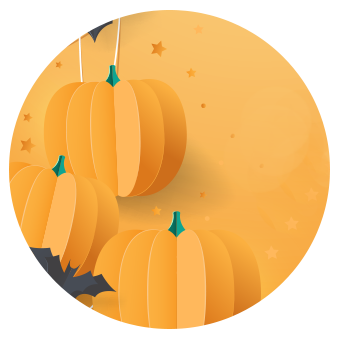 To locate these activities within Renzulli Learning:

Under the 'Teach' navigation, click 'Search'.
On the Search page, type in the title of the activity you would like to locate.
For more ideas to infuse enrichment activities with your curriculum, please visit the Unit Supplements on the Teacher Site, under “Teach.” We can also link these enrichment resources to your regular curriculum if you send us a theme or topic.

Make your own flying bat straw “rockets” using our free printable bat template. This Halloween science and STEM / STEAM activity is super easy and lots of fun for kids of all ages.

Complete the photo by moving all the pieces to the correct place. You can rotate a piece by pressing “A” or the rotate button at the left bottom side. Is a piece missing? Keep holding the rotate button down and pieces will emerge. Start the timer to measure how long you need to solve the puzzle. Click the double arrows to complete more Halloween puzzles.

There are tons of ways to explore the fall season through fall STEM activities using natural materials like real apples as well as themed apple science ideas! The same with pumpkins. Let’s get started! Click on all the links that are colored red, orange, and brown!

Pumpkins and more await you at this website! Learn about how pumpkins grow, pumpkin history, pumpkin farms, and more!

Art For Kids Hub: How To Draw A Halloween Silhouette
Videos & Podcasts

Art for Kids Hub presents how to draw a Halloween silhouette. Before you run out and get a ton of candy, follow along with us! Learn how to draw a spooky Halloween Silhouette. It’s super fun and you can use your creativity to change your drawings and add different spooky things.

Have you ever taken a really careful look at a pumpkin? Follow these suggestions to start seeing a pumpkin through the eyes of a scientist! Weigh a pumpkin, count its seeds, try to make it float, and more.

National Geographic: What is Day of the Dead?
Videos & Podcasts

Día de los Muertos, or Day of the Dead, is a celebration of life and death. While the holiday originated in Mexico, it is celebrated all over Latin America with colorful calaveras (skulls) and calacas (skeletons). Learn how the Day of the Dead started and the traditions that make it unique.

"I saw the pale student of unhallowed arts kneeling beside the thing he had put together. I saw the hideous phantasm of a man stretched out, and then, on the working of some powerful engine, show signs of life and stir with an uneasy, half-vital motion." A summer evening's ghost stories, lonely insomnia in a moonlit Alpine room, and a runaway imagination — fired by philosophical discussions with Lord Byron and Percy Bysshe Shelley about science, galvanism, and the origins of life — conspired to produce for Marry Shelley this haunting night specter. By morning, it had become the germ of her Romantic masterpiece, Frankenstein. Written in 1816 when she was only nineteen, Mary Shelley's novel of "The Modern Prometheus" chillingly dramatized the dangerous potential of life begotten upon a laboratory table. A frightening creation myth for our own time, Frankenstein remains one of the greatest horror stories ever written and is an undisputed classic of its kind. — From the Inside Flap

On October 31st, children in the United States dress up in costumes and knock on doors yelling, "Trick or treat!" Back in the 1800s, it was known as All Hallows Eve. It was also the eve of the Celtic New Year. Explore more facts and customs related to this holiday.

Do you ever wonder why we celebrate Halloween? If so, than come check out the website! You will discover how, why, and when we celebrate this holiday. This website gives the complete history of Halloween!

Madame Leota appearing in a crystal ball which was the inspiration for this project. Basically it's a decorative wooden box which will start to play a video once the lid is opened and will immediately stop playing once the lid is closed. The video can be changed to something else so it's easily customizable. You can use it for Madame Leota, a Halloween prop, leaving a treasure hunt for the kids, just about anything you can think of, so have fun. Click the link to read more about how to make a “Madame Leota Box”.

Get your dancing shoes on. This online tour will look at three of the biggest holidays that are unique to Mexico! Learn about the origins, historical significance, and traditions of Cinco de Mayo, Dia de los Muertos, and La Virgen de Guadalupe. Are you ready for a party?